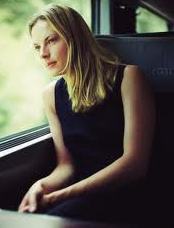 Boobs and I caught a train over to Edinburgh to meet MyAuthor for lunch and talk about her new book. We scored a table seat on the train, which normally would be good, but this meant that I had to spend the entire journey making polite conversation with Boobs. After a bit of chit chat, she pulled some paperwork out of her bag and said, ‘I’ve got work to do, if you don’t mind.’ Despite the attitude, with her doing work I was allowed to stare blankly out the window. (I thought about bringing work to do on the train, just so that I’d look like I was doing my job, but she’d probably ask about it, and I’d have to blag something, and she’d figure out that I wasn’t doing my job. Staring out the window worked just fine instead.)

We met MyAuthor at a little café near her house in Leith. When she saw me she gave me that fabulous hug and double kiss that I’ve grown to love, and thanked us profusely for coming to meet her. She’d broken her ankle by slipping on the ice during the snow over Christmas, and while it’s just about healed she isn’t too keen on travelling at the moment.

Boobs, never one for pleasantries, got right down to business, which was a shame because I was hoping to have a conversation with MyAuthor. Although, it’s not like we could talk much with Boobs hanging about.

She was told (not asked) that she needs to cut that extraneous character, and much to my surprise MyAuthor agreed. She said that she’d developed this character ages ago, and loves it so much, but she’s not sure what to do with him. She put him in this novel because ‘I just want to use him. Show him off’, but she wasn’t sure if he was right. Her agent said to use the character, but MyAuthor agreed with Boobs that he should come out. ‘I’ll find a part for him eventually’ she added. MyAuthor talked about the character like he was an actor, ‘right for the part’.

We talked more about the book, and minor changes, before MyAuthor brought up an issue she was having. MNM hoped to pick up momentum in her sales, and recently they’ve negotiated a contract that requires her to produce a book a year. That’s not unusual in the genre she’s in, but MyAuthor said – ever so politely – that she’s regretting that contract. She feels like her writing is suffering. She only just launched a book at Christmas, she was on a book tour (until she broke her ankle), she’s trying to do rewrites on this book, and as soon as this one is handed in she’ll need to start the next. She said that it’s way too much, especially at her age. (I didn’t think she was that old, but I guess it would be a hectic lifestyle for anyone.)

Boobs listened then did something I didn’t expect. Boobs is usually such a hard bitch, and I’ve seen her bully authors, but she was quite understanding in this instance. She said that the rewrites need to be done by end of April, and they’ll have the cover, copyediting, typesetting and proofs done by the end of the summer. That way they’ll have it on the shelves by October, just in time for Christmas. And rather than automatically jump into yet another book, after April MyAuthor can take a break from writing, as long as she does the Festival circuit to make up for the book tour she didn’t finish just past Christmas. Then they’ll talk about relaxing the ‘book a year’ clause in the contract, maybe a book every 18 to 20 months.

MyAuthor seemed relieved, and said she has ideas for the next few books, but she didn’t want to rush writing them. The rest of the lunch was quite leisurely, and as we left MyAuthor grabbed my hand and whispered in my ear, ‘Give me a ring. I’ve been hearing rumours, and I just want to see if you’re okay.’

I wasn’t quite sure what the rumours were about, but I assume they are Goatee related, so I assured her that I was fine, but I’d give her a call in the next couple of days.

On the train back to Glasgow, I told Boobs that I thought it was really great that she was giving MyAuthor some slack in her contract. A book a year must be very difficult. To this Boobs said, ‘We’re thinking of dropping her. Her sales are down significantly. So there’s no point in her writing that next book anyway.’

This entry was posted in Notes from the Intern -- The Internship, Publishing, Women in Publishing and tagged a book a year, author contracts, MyAuthor, postaday2011. Bookmark the permalink.